Share
Facebook Twitter Pinterest Reddit Email
here ‘s a sad fact : gamplay mods for the ZDoom class of ports are rarely compatible. Most of the time they are n’t, and if you try to run several mods together, either something will break, or you just wo n’t see certain features .
Mods besides do n’t always work with all maps. sometimes they break symmetry on some maps, other times they can make something besides easy or besides difficult, and if a map is highly advance and has its own script, certain things may not work .
But why ? The childlike answer is : it ‘s very hard to make things compatible under ZDoom. This problem is actually not unique to the ZDoom family of ports ; it appears in many other games, but possibly in this engine it ‘s a sting more apparent .
First of all, if a mod is a gameplay mod ( i.e. it has no maps and is intended to be played on existing maps ), that means that when it adds a weapon, or a monster, or a prop, it has to replace an existing object. indeed, if you have two mods that replace the Shotgun with some early weapon, you ca n’t combine them : you ‘ll either see one weapon, or the other. Or, say, a mod adds a humble feature to the Cacodemon : its blood is now blue. then there ‘s another mod that changes a unharmed lot of things for the Cacodemon, such as adding raw attacks and changing its stats, but guess what ? Those mods ca n’t be combined, because the one that merely redefines Cacodemon ‘s lineage has to replace the wholly Cacodemon to do it. then, these mods wo n’t work in concert.

In addition to that, there dozens, hundreds, thousands of little things that a mod writer can simply forget to take into account. For a example, you ‘re playing an advance map with a weapon mod ; an event happens in that map that takes away all your weapons and then gives you back the fist … except you get the vanilla Doom Fist, not the one from your weapon mod. Why ? Because that ‘s how that map ‘s script was written, and because both the vanilla Fist and the modded fist are present in the code, and it ‘s something that ‘s pretty arduous to take into bill .
thankfully, nowadays GZDoom has ZScript, which is an expand adaptation of DECORATE, its former actor scripting language, and ZScript offers many more tools to increase compatibility .

Okay, so how do I play Beautiful Doom with other mods? Do I need to change something in the settings?

Yes, you may need to !
Let ‘s look into this in an neat manner .

If you want to play Beautiful Doom with another gameplay mod ( such as a monster pack, or a weapon mod ), it ‘s normally crucial to make indisputable that Beautiful Doom is first gear in the load order, and the other mod is final. Because whatever is loaded last takes precession, so, for model, if you want to see the HUD from another mod, that other mod has to be loaded after Beautiful Doom .
If you ‘re using ZDL, good make certain the second mod is at the bottom of the list : 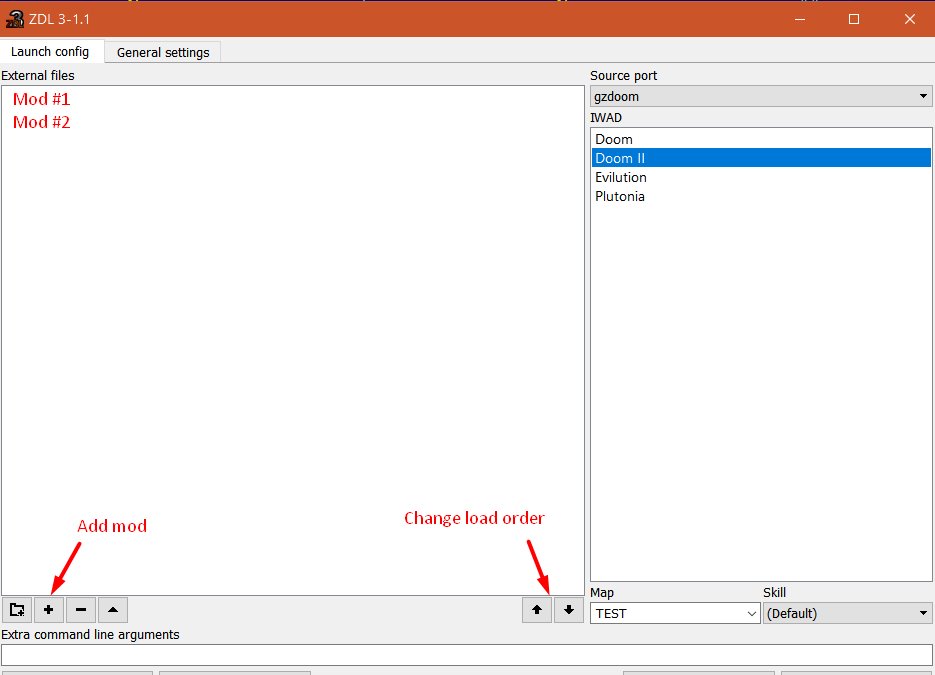 And if you ‘re using a .bat file or command argumentation, the moment mod should be last :

now let ‘s take a look at this settings menu :

Beautiful Doom Items : This controls things such as keys and power-ups. Beautiful Doom items are not different in any way from vanilla items, but if you ‘re playing another gameplay mod, or if you good do n’t like them, you can disable this .
Beautiful Doom decorations : This choice affects props : torches, lamps, column, cosmetic corpses/bodies ( such as a victim on a stake, hanging torso, etc. ) .

This is a complicate subject, so I ‘m making this into a branch secton. It has 3 options : Disabled, DEHACKED only and DEHACKED and sprites.
first, if you do n’t know what DEHACKED means : it ‘s an old tool that was capable of modifying Doom actors back in the DOS era, and it ‘s compatible with every source port out there. It ‘s sometimes silent used nowadays with map packs that strive to keep vanilla compatibility. A effective case of an excellent holocene map pack that uses DEHACKED is Eviternity .
Eviternity contains a custom k Chaingunner, a Cyber Baron and a mechanize little finger that are defined in DEHACKED. now, you could merely disable beautiful Doom Monsters, but that ‘s not very fun to do merely for 3 monsters, correctly ?
If you use DEHACKED or DEHACKED and sprites choice, those DEHACKED actors will be automatically detected by Beautiful Doom and they wo n’t be replaced, tied if you ‘re using Beautiful Doom monsters. neat !
What about the sprites part ?
well, imagine you ‘re playing some actually old batch, or a very retro-styled one. sometimes wads directly replace sprites to make one thing expression like another. For example, a forest-themed map that replaces a floor lamp fairy with a green shrub fairy. It does n’t contain any code, it does n’t replace the actor itself, it merely replaces the fairy by using a different graphic with the same name. And in this case you probably want to see the bush, not a lamp, because that ‘d break the map ‘s aesthetic, right ? This is quite common in Deus Vult II, for model .
well, if you use DEHACKED and sprites option, Beautiful Doom will detect if more than one fairy with the same name is loaded, and it wo n’t replace the actor. note, for inspire objects it ‘ll entirely check for the first fairy ; for example, for Red Torch it ‘ll check if TTRBA0 fairy is loaded more than once .
If the choice is set to Disabled, Beautiful Doom Actors will constantly spawn, regardless of fairy or DEHACKED replacements. Most of the time DEHACKED and sprites is the prefer choice, but things may vary .

This hierarchical menu is by and large for edge cases, when things either go very wrong with custom monsters, or when you precisely dislike a particular surrogate and want to get rid of it .
The menu is precisely what it says : if Beautiful Monsters are enabled, in this menu you can define whether each specific monster will be replaced by a Beautiful translation of not .

Don’t forget to restart the map!

note, changing any of the compatibility options require loading the solid map in memory again. That means restarting the map, and you wo n’t be able to load a save that was made on the same map before you made the changs. That ‘s because everything related to actor replacements happens at the startle of a map and ca n’t be changed dynamically.

It ‘s wholly finely to set the settings as you like in the chief menu before hitting New Game a well !

What about the HUD?

many people have asked me if it ‘s possible to add an choice to disable Beautiful Doom HUD. sadly, it ‘s not that easy, because GZDoom does n’t allow to precisely load multiple HUDs and switch between them .
But you have some options :