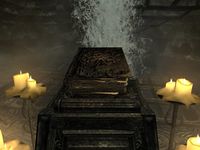 A Black Book Black Books are Daedric artifacts created by Hermaeus Mora, the Daedric Prince of Fate and Knowledge. Each reserve contains some manner of forbid cognition. Some books are from the ancient by ; some are from the future. The dense tomes are bound in black covers, with a symbol representing Mora on the front, and emit a black mist. They are comparable to the Oghma Infinium, another tome of cognition created by Mora. The books were spread across Tamriel by Mora, and are normally located in the depths of ancient dungeons. [ 1 ]

Through reading a Black Book, the proofreader will enter Apocrypha, the kingdom of Oblivion created and ruled over by Hermaeus Mora. Tentacles will emerge from the tome and envelop the subscriber. An apparition of the subscriber ‘s body remains in Mundus, tethering their life sentence impel. Most mortals who read a Black Book are driven insane, but those who successfully journey through Apocrypha are known to discover herculean cognition. Dying in Apocrypha while reading a Black Book may plainly banish the subscriber back to Tamriel. Rereading a ledger will return the lector to the lapp sphere of Apocrypha, allowing them to attempt Mora ‘s gauntlets again or harness the power of a unlike objet d’art of cognition. [ 1 ] Copies of the contents of Black Books can be made without entering Apocrypha. [ 2 ]
In 4E 201, several Black Books were unearthed on the island of Solstheim :
This Black Book was located in the Temple of Miraak. It was obviously used by Miraak in the Merethic Era to flee to Apocrypha when his temple was burned down by the Dragon Cult. It was recovered by the concluding Dragonborn and a member of the Skaal, and the Dragonborn late used it to defeat Miraak .
This Black Book was discovered by the Dwemer, and taken to the city of Nchardak for survey. It was recovered by the concluding Dragonborn and Master Neloth of Great House Telvanni.

This Black Book was recovered by Master Neloth some fourth dimension in the Fourth Era. He hesitantly gave it to the last Dragonborn in 4E 201 .